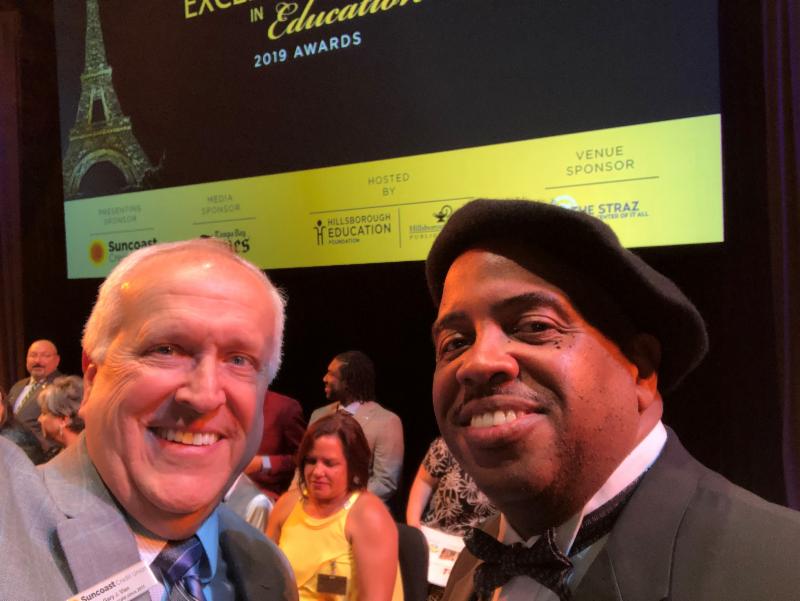 The Hillsborough Education Foundation and Hillsborough County Public Schools partner every year to celebrate “Excellence in Education” and recognize some of the school district’s most deserving employees.
The event annually celebrates outstanding teachers, school diversity contributors and instructional support personnel. It draws thousands to the David A. Straz Center.
Yet what all those people don’t know is the event has doubled as a Leadership Tampa 2003 reunion.
For the past four years, I’ve had the honor of hosting the event. Bruce Faulmann, the Tampa Bay Times’ vice president of advertising/marketing, has watched from the audience for each of those award celebrations as a member of the education foundation. For the past three years, Suncoast Credit Union vice president Gary Vien has joined me on stage as the presenter for the instructional support award finalists. The credit union serves as the event’s primary sponsor.
Bruce, Gary and I spent a magical year together as members of the Leadership Tampa 2003 class. Everyone in LTA insists their class was the best, and we’re no different. We spent days immersed in various aspects of city dynamics, and evenings in debriefings, debating everything from politics to sports.
At the time, Bruce worked for the Times’ rival, the Tampa Tribune, and Gary toiled for Busch Gardens. Now Bruce is with the Times and Gary works for Suncoast. Of course, we’re still the same guys, albeit a little older and wiser. We’re always excited to see each other at the event, and excited to help the foundation.
As a HEF board member for many years, I see firsthand HEF’s impact on the school district, its teachers and students through their many programs from the Teaching Tools Store to scholarship and mentoring,” Bruce told me after the event. “But absolutely my favorite is our celebration of Hillsborough County’s best teachers and staff at our annual Excellence in Education awards.”
This year, the theme was “A Night in Paris,” so I donned a beret. Truth be told I looked more like Rerun from What’s Happening and little like a French gentleman. That’s okay. If humbling myself by resembling a 1980s sitcom star leads to honoring teachers, I’m all for it.
It’s always an inspiring evening with many moving moments the ceremony always produces. A student escort introduces each of the finalists, and the kids frequently offer cute but poignant tributes. The teachers gush and blush and the winners never fail to bring emotion to the podium.
“The evening warms your heart and takes you from laughter to tears,” Bruce said. “The kids can sell! You’re rooting for them all.
“Adding to awesomeness of the evening is watching my talented LT ’03 classmates. Hoop, aka Rerun, as the ever-charming emcee, and Gary, as the presenting sponsor, representing Suncoast Credit Union. Both could stand-in for Pat Sajak or Alex Trebek if either needed a night off.”
This year, when the Ida S. Baker Diversity Award winner, Newsome High’s Sandra Misciasci, heard her name called she sobbed and offered a long list of tearful thank yous. Gary and I could only look at each other and think, “This is what this event is all about. This is why we show up every year.”
“Never could I imagine back in 2003 while at Leadership Tampa, that I would be presenting at the 2019 Excellence in Education awards with others from our Leadership Tampa Class. Being able to congratulate 678 nominees and the 13 finalists is very heartwarming.”

“This is Tampa. This is why we continue to give back. What a fantastic journey and one that continues to give back as much as you put in to a city focused on the future.”

As Leadership Tampa Alumni looks to create a partnership with the district, I think it would be thrilling to have a larger contingent of LTA members at this event next year. We can come to not only show our support for the current education system, but to embrace the concept of paying it forward and thanking the teachers who helped change the trajectory of our own lives.
It would be great if I could look out from that stage next year and thank LTA for its support and recognize more than just Bruce and Gary.
That’s all I’m saying.