“You never really understand a person until you consider things from his point of view…until you climb into his skin and walk around in it.” Atticus Finch tells his daughter,

Scout, in To Kill a Mockingbird.

Leadership Tampa Class of 2018 spent Law Enforcement Day climbing into and walking around in the skin of local law enforcement.

The day started at the Orient Road Jail, which is run by the Hillsborough County Sheriff’s Office. Richard Grammatica, President & CEO of Tampa Bay Federal Credit Union, Law Enforcement Day sponsor, addressed the class emphasizing the importance of law enforcement in our community.

Colonel Michael Perotti, who leads the Department of Detention Services then gave an overview of the department’s responsibilities and led a question and answer session with the class. His department is responsible for the housing, custody, and care of people incarcerated in Hillsborough County. The Orient Road Jail is the primary receiving facility for law enforcement agencies in Hillsborough County.

Col. Perotti explained that people in his department’s custody, (i.e. “in jail”) are there for one of two reasons:

Because the ratio inmates to officers is 1:72 in the housing pods, the mix of inmates is carefully considered for each pod. Each pod has a mix of people with various backgrounds. People arrested for white collar crime will be mixed with those accused of violent crime.

According to Col. Perotti, the majority of the people taken into custody suffer from some type of mental health issue. Additionally, the inmates must receive medical care. The budget for these services in the detention system is staggering.

LT’18 divided into 4 groups led by jail staff for tours of the facility, which included central booking, the command center, a typical pod, and an isolation unit. A person taken into custody is received in central booking, where they are searched. Each person must be evaluated for medical and mental health issues. The command center is a room full of video screens where the jail is monitored. Should any issue arise for a deputy in any part of the jail, the command center can get help there almost immediately. A typical pod at the Orient Road Jail has up to 72 inmates and one deputy with them. Isolation units are used for those inmates that are a danger to others or who would be in danger among the other inmates.

LT’18 gained an understanding from top brass down that the humane treatment of inmates with dignity and respect is the duty of the staff at the Orient Road Jail. The philosophy has changed from the past when jail inmates were kept in cage-like cells and treated like animals. “When people are treated like animals, they act like animals,” Col. Perotti explained. The goal here is to treat them as people.

Sgt. Wanda Johnson explained that they have care and custody for people who have not yet been convicted of a crime. Therefore, they must be considered innocent until proven guilty. Her attitude reiterated the overriding theme at Orient Road Jail that people are to be treated with dignity and respect.

LT’18 was treated to lunch in the staff cafeteria at the Orient Road Jail. Each table had a local law enforcement leader with 3 or 4 members of the LT’18 class. The food was (surprisingly) good, but getting to know these leaders on a personal level was a highlight of the day.

After lunch the class went to the Tampa Police Department Training Facility. Interim Chief Brian Dugan welcomed the group. He shared that he was treated for prostate cancer last year. He said that if someone told him he would be serving as Interim Chief then, he would never have believed it.

Major Lee Bercaw (LT Class of 2017) followed with TPD statistics and strategies. Starting with Stephen Hogue’s appointment as Chief in 2003, TPD has taken a proactive business mentality to policing to ensure that Tampa is a great place to live and work. TPD implemented a “Focus on 4” strategy to aggressively target burglary, robbery, auto burglary, and theft. This strategy paid off. The statistics show that Tampa had 25,000 fewer crimes reported in 2016 than it did in 1996.

The class split into four groups for tours of the facility. They had explored equipment and

met with members of the bomb squad, the TPD and HSCO SWAT teams, and the TPD marine unit. On the driving course, LT’18 had the opportunity to ride along with Cpl. Jared Douds to experience a J turn, which is used when an officer needs to quickly evade a situation in his car (Google it  – it was a thrill!). They also experienced a car chase on the driving track where Cpl. Douds used his car to execute a Pursuit Intervention Technique (PIT) maneuver to cause the car expertly driven by Range Master Steve Smith to abruptly turn the evading car sideways to stop it.

Using a projected simulation and various simulation weapons, LT’18 sampled the training that officers receive in handling realistic situations in the field. Trainees interact with subjects by talking to them on the screen while the training officer selects the subjects’ reactions. Volunteers from the class had to make decision about whether and when to use a Taser when faced with a belligerent bar patron, a school shooter, and a homeless person sleeping in a doorway. This provided the class members with perspective about the use of deadly force against suspects and how quickly those decisions must be made.

TPD officers are required to be trained in Taser use. They are required to experience being tased only if they choose to carry a Taser in the field. LT’18 members were given the option to experience what it is like to be tased. Surprisingly, several members of the class took Training Specialist Russell Marcotrigiano up on his offer to tase them. Tased class members described the feeling as a “paralyzing muscle cramp in my back” and “the longest 5 seconds of my life.”

Together with police ride-alongs prior to Law Enforcement Day, the class had the

opportunity to get as close as possible to walking in the skin of a police officer. A classmate noted how officers not only risk their lives, they actually give up something intangible. They see the worst of humanity and it takes something from them changing way they see people and the world. However, they must maintain an impartiality that allows them to not rush to judgement in a situation. Rachel Feinman pointed out the officers’ knowledge and respect for the law. LT’18 members noted the compassion and respect the officers show to victims and suspects alike. Every member of LT’18 came away with a new level of understanding for the issues law enforcement in our community face each day. Truly it was an outstanding day. Thanks again to Tampa Bay Federal Credit Union for sponsoring it. 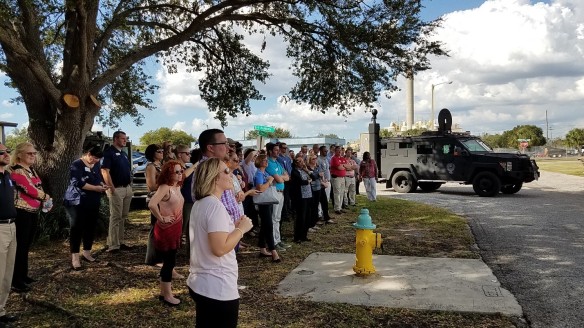