The final day for Leadership Tampa Class of 2017 – G.O.A.T. had come! I could hardly believe that this day had arrived; Tourism Day was here. The day started, as usual, at the crack of dawn. As I was driving over the Howard Frankland Bridge watching the sunrise over the Tampa skyline, I was excited for what the day would bring. I had been a tourist to the Tampa Bay area for a number of years prior to moving to the United States of America and I was looking forward to the behind the scenes look at the impact of Tourism on Tampa Bay.

Thanks to Randall Woods and Toi Walker, our G.O.A.T. shirt sponsors, and to our fearless leader, Susan Maurer, we were able to wear our G.O.A.T. shirts for the day. After a quick change in Bibiana Gomez’s darkly tinted car, I was ready to get on the bus with my bus buddy Derek Kantaskas and head to our first stop, Busch Gardens!

After our security pat down we went through a beautiful tree-like arch. Wait, did that tree arch move?? 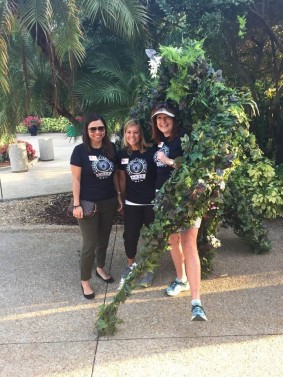 Once we passed the moving trees we headed to breakfast and were greeted by none other than the Sesame Street cast! 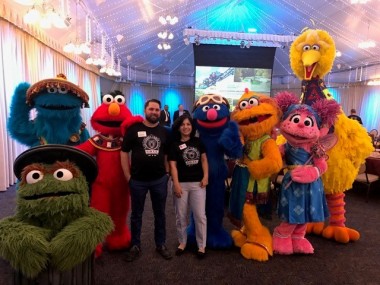 While we had a delicious breakfast sponsored by Busch Gardens, we heard from Tim Harding, a representative from the University of Tampa, our sponsor for Tourism Day, about the impact that UT has on tourism through the Henry Plant Museum, Bailey Arts Studio Theatre, the national conferences that UT hosts and the international students from 110 different countries that attend UT. When conference attendees, students and their families come to Tampa they not only come to UT they also visit the beaches, Busch Gardens and the other many attractions Tampa has to offer.

We also heard from Troy Manthey of Yacht StarShip who shared with us that it was a bittersweet day as it was the first time that the late Thom Stork was not present for Tourism Day. Thom Stork was the President and CEO of The Florida Aquarium and was known as the Godfather of Tourism in Florida and Tampa. Manthey went on to announce the formation of the Thom Stork Hospitality Memorial Scholarship. The scholarship will sponsor a seat in Leadership Tampa for a person working in the hospitality industry in Tampa for years to come.

Stewart Clark, President of Busch Gardens, welcomed us to Busch Gardens and, after teasing Jamie Johnson, LT’17 G.O.A.T, shared how Busch Gardens did not start as a theme park but as a bird park for employees of Anheuser-Busch 58 years ago. Busch Gardens is not only a theme park, it is also recognized for its zoological expertise and is rated among the world’s best working zoos with over 12,000 animals. Clark stated that their key philosophy is to have a park that is safe and clean with amazing guest service that inspires visitors every day. Busch Gardens generates over $20 million in sales and use taxes and $3 million in property taxes. When asked about the greatest limiting factor for Busch Gardens he stated that it is the lack of public transportation in Tampa. This did not surprise us as transportation has come up numerous times in LT’17 as a limiting factor to growth and as a class we experienced it first hand during Transportation day.

We then got a chance to hear from Roger Dow, President and CEO of U.S. Travel Association, and Ken Lawson, CEO of Visit Florida, about the economic impact of tourism both in Florida and nationally. It is amazing to think that for every 85 visitors to the state, one tourism job is sponsored. This equates to more than 1.2 million Floridian’s employed in the tourism industry! Further, tourism is the single biggest reason why Florida residents do not pay state taxes since tourism raises over $5.3 billion in sales and use tax in the state.

And so with our tummies full of breakfast and our minds full of how much tourism saves us in tax dollars, we walked to our first Busch Gardens attraction, the safari ride! On the walk there we got a close up look at an alligator, the cheetah enclosure and a chance for the compulsory group photo outside the Serengeti Overlook. 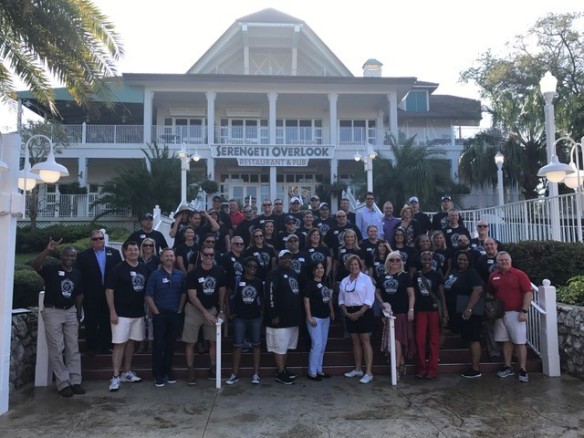 We split into groups and hopped aboard the open-aired vehicles for our wild and wonderful tour of the Serengeti Plain with our personal tour guide who shared stories of the habitat and the wildlife that inhabits it.  We also made some friends along the way as there was a giraffe or two that followed us for a while. 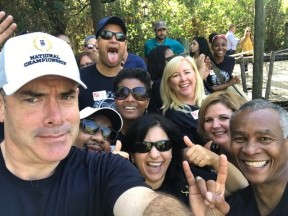 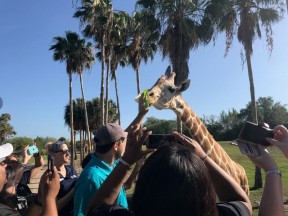 After we disembarked from our safari vehicles we headed to another wild ride of a different variety: Cobra’s Curse! Fortunately we had some fellow LT’17 GOATS who were kind enough to hold our belongings as some of us crazies went on the ride. 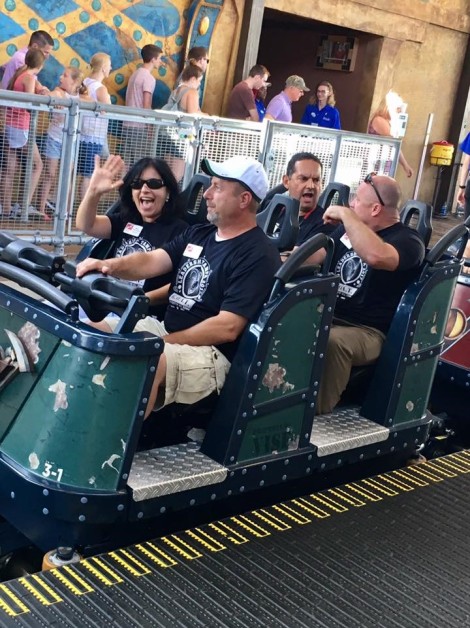 We have still not fathomed what Jose and Casey were discussing as we braced ourselves for the ride! 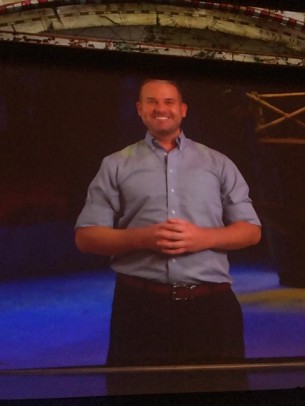 By the time we finished this ride we were behind schedule and we half-walked, half-ran to our behind-the-scenes look at Iceploration, Busch Gardens‘ 30-minute ice skating show that explores the four corners of Earth. Our big screen introduction to the show was none other than a larger-than-life Jamie Johnson who shared how he and his team strive to create guest experiences that matter. 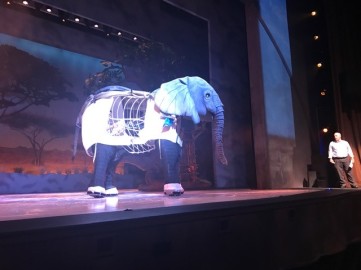 He certainly did not disappoint as we were privileged to see how the incredible scene changes occur backstage, how it takes two people on 14 inch drywall stilts to operate the large elephant character and saw firsthand how live animals bring a certain unpredictability to the show. We were also treated to a live presentation of Alex and Allison in action on the ice and our jaws dropped as we saw how close Allison’s head came to the ice during their presentation! 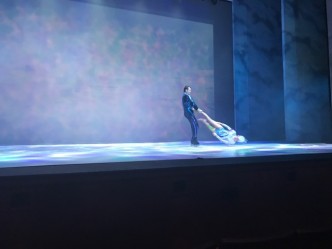 After this amazing experience we ran back to our bus, searched for our bus buddies and headed off to our next stop, Lowry Park Zoo!

We were welcomed to Lowry Park Zoo by Elizabeth Henning, Chief Financial Officer. She shared that the zoo relies on gate revenues and fundraising to supplement the dwindling state and local grant revenues to continue to deliver their life-sustaining rehabilitative work with manatees and other wildlife. We then proceeded to our first stop at the zoo, the newly launched Dino’s Alive exhibition. While we learned several very interesting facts about the dinosaur era, the one that stood out most in my mind was that chickens are mini T-Rexes!  Who would have thought? On a serious note, we also heard that vultures are under threat of extinction due to the use of pesticides and that zoos exist to support and sustain wildlife that are under threat of extinction, like Aya, the clouded leopard cub. Lowry Park Zoo participates in the Association of Zoos and Aquariums (AZA) Clouded Leopard Species Survival Plan (SSP) designed to support the conservation of select wildlife at risk of extinction. These facts were shared with us by Joe Couceiro, CEO of Lowry Park Zoo, during lunch at Reilly’s Reserve, sponsored by Lowry Park Zoo. 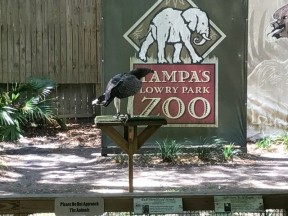 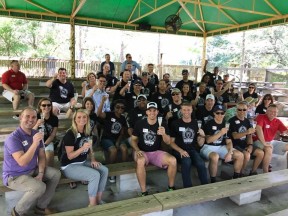 Another speaker was Jason Carroll, Executive Director of Friends of the Riverwalk, who shared the impact of the Riverwalk on bringing Tampa residents and national events to downtown Tampa. The Riverwalk was center stage during the 2017 College Football Championship Game where fans were able to get just about everywhere by foot.  One of the features of the Tampa Riverwalk is the Historic Monument Trail which displays 26 bronze busts of prominent people in Tampa’s history. A little known fact of the busts is that they are at the actual height of the person depicted. 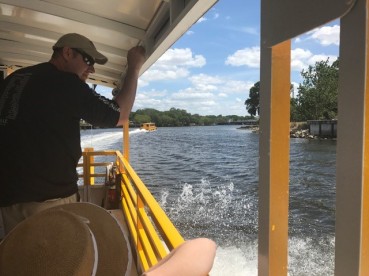 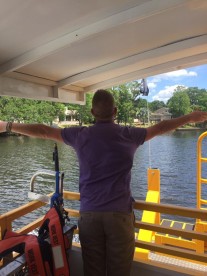 Before our behind-the-scenes tour of the Florida Aquarium, we heard that the Florida Aquarium building was an old Coca-Cola Bottling Plant that was donated to the City of Tampa and that the Aquarium has been the catalyst for development in the area. This was followed by a panel discussion with Ron McAnaugh, GM, Marriott Waterside Hotel and Marina and Eric Blanc, Director of Sales, Tampa Convention Center. They shared how the Convention Center attracts national and international conferences to Tampa by hosting over 200 events a year and is active for over 330 event days. These events generate over 304,000 room nights at local hotels.

During our behind-the-scenes tour, we learned about the incredible work that the Florida Aquarium does with sea turtles and coral and that they seek to inspire people to care about sea life. 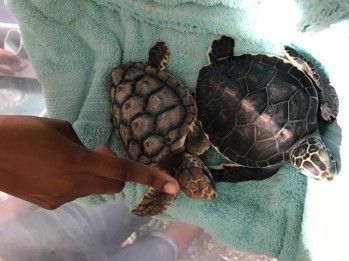 We departed the Florida Aquarium via the Streetcar and headed back to the Tampa Convention Center where we were welcomed by Rick Hamilton, the Convention Center and Tourism Director. Our final panel discussion for the day was with David Downing, Executive Director for Visit St. Petersburg/Clearwater and JoLynn Lokey, Chief Operating Officer, Visit Tampa Bay. They stressed the importance of tourism at the local level, that it brings over 22 million visitors Hillsborough County alone and that one in 19 jobs in Hillsborough County is tourism-related.

We then headed to the grand finale for the day: a ride back to Channelside on board the Yacht StarShip II. Little did we know as we boarded the Yacht StarShip that there was another surprise waiting for us: Josh Bullock, our vice chair, had arranged for our significant others join us for our final ride of Leadership Tampa, Class of 2017, the GREATEST OF ALL TIME!

What an amazing experience this has been! Friendships have been forged for life and we are now equipped with the knowledge to continue to support this community we are lucky to call home!

Thank you Susan, MaryBeth, Josh and Hannah for your tireless dedication to making this the most enjoyable and informative experience ever! 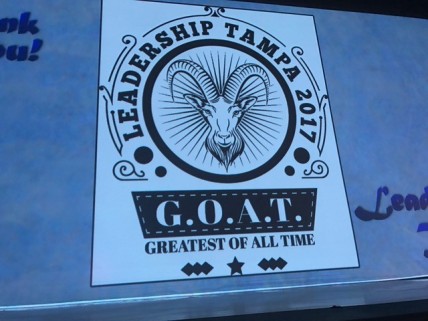